One of four children, Stanley Edward Bogdan was born in Nashua, New Hampshire on December 16, 1918. Perhaps influenced by his father who was a machinist, Bogdan went to work as an apprentice at the Rollins Engine Company in Nashua after graduating from high school in 1936. He enjoyed fly-fishing and knew where he could catch trout. With his keen eye for detail and commitment to perfection, he began to think about making his own fly reel.

Since 1940 the Bogdan Family has been producing fine handcrafted gamefish reels for sporting anglers the world over. So widely accepted is the design that they have gained international recognition as the epitome of the reel makers art, and have probably landed more salmon that any other make of reel over the last several decades. The design is the melding of practical mechanical application with classic styling. Its popularity is due, in large part, to the careful marriage of these two worlds so important to fly fishermen.

A Bogdan reel is the culmination of several months labor, each carefully machined from a variety of solid bar stock, including tool steel, Stainless steel, aluminum, bronze and Delrin. Bogdan Salmon reels are available in direct drive only (no anti-reverse). The standard reel has a 2 to 1 retrieve ration. Single action or 1 to 1 retrieve is available on any 2 to 1 reel model, as a special order.

The Salmon reels use a double set of caliper actuated, spring mounted, Delrin brake shoes that bear against a clutch driven steel drum. The drag tension is adjusted via a 10 position lever mounted on the back side of the reel. The Salmon models have an audible click which can be turned off on most models. There are no spare spools, and the direction of the wind cannot be changed.

The Steelhead and Trout reels are direct drive, 1 to 1 retrieve reels employing traditional sprocket and pawl 'clicker' set in a directional oscillator that checks spool overrun. This also provides an audible click in both directions of spool rotation. This 'drag' is non-adjustable and spools are not interchageable. The front plate (handle side) of the Bogdan Trout and Steelhead reels are perforated and an aluminum oil cap sets in the center of the back plate.

Bogdan reels have black anodized side plates with a pale gold anodized frame. Reel foot, handles, adjusting knobs, etc. are clear anodized. All black reels are available as a special order at an extra charge.

Many stories have been written about the long waiting period for purchasing a Bogdan reel. I wish I could say otherwise but most of the tales are true. The average wait for a Bogdan reel is about 3 years. Since each reel is the product of very intensive hand labor, forecasting delivery is virtually impossible. 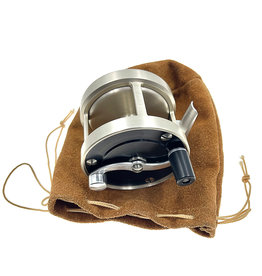